The 5 senses that a dog has are: Smell, Hearing, Taste, Touch and Site.

Which of these is the strongest? If you guessed ‘Smell’, you’re barking up the right tree!
It has been found that a dog’s sense of smell can be 10,000 to 100,000 times stronger than ours.  There are several factors why dogs have such a great sense of smell. 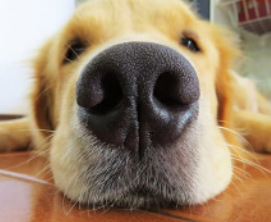 There are some breeds that have better noses than others. Such breeds include the Bloodhound, Beagle, German Shepherd, Dachshund, Foxhound and Labrador Retriever (just to name a few)!  Factors like snout length, number of olfactory glands, skin folds and ear length can attribute to better sense of smells. Dogs are so cool!